Actualize Fitness member, Carl Patterson, is a poster-boy and textbook example of what happens to Actualize members when they plug into all we offer and go on a journey to explore…

“Everybody wants to actualize his or her purpose and potential. But most do not understand nor are rarely given the tools to achieve safe, effective and sustainable success over time.

The process of actualizing purpose and potential begins when desire meets an intentionality to move forward, and the discipline of undergoing the rigors required is valued and pursued with the tools to make it happen.

You bring the desire, intentionality and discipline, and we arm you with the plan and tools which educate, encourage and empower you every step of the way.”

Two years ago, Carl was running 5 miles a day, 4 days every week. As he put it, he was in pretty good shape. Out of the blue, Carl endured a Hemangiopericytoma tumor on the L5 nerve of his spine. His symptoms were tight muscles and pain in his hamstrings, glutes and sciatica that required him to take medication for pain. Carl also experienced a drop foot gait, meaning when he moved to walk his foot was limp which accelerated his need for surgery.

After a lumbar laminectomy and cyberknife radiation the tumor was destroyed. Good news. Doctors said he would never run again and  physical activities would be extremely limited. Bad news. That didn’t stop Carl!

A while later, Carl found Actualize. He came to us ready to get back in the game and frankly to defy the doctor’s orders (in a wise approach that was scaled based on the boundaries his body presented). He was committed and jumped in eagerly, training 3x per week at first and progressing to 5x per week. Also, Carl implemented Actualize Nutrition Coaching and received relational accountability and nutrition consulting from the Actualize Staff.

Carl started with Actualize at 235 pounds and currently weighs 220 pounds. Not bad weight loss, but the scale is usually quite deceiving. What you don’t see on the scale, you see in real life. Carl has gone from size 42 to a 34 inch waist. He has lost over 12% body fat and counting, and gained more than 10p pounds of lean muscle…WOW!  Check out his InBody270 body composition analysis below.

Carl shares, “My results are a testament to the Actualize program that if you work hard at it, the results will come.”

We LOVE this story on so many levels. Carl’s journey of overcoming adversity and transforming his life
takes the cake. Carl plans to continue with Actualize in hopes of seeing more of the same progress over time. Carl, we are so grateful for your friendship, dedication and hard work, and the positivity you bring to the Actualize family!

Are you an adult fitness enthusiast desiring to transform your health & fitness? Click here to learn about the Actualize Fitness 30-Day Trial! 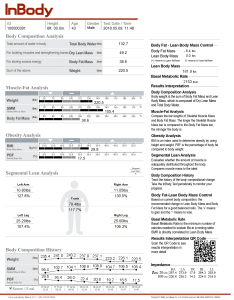