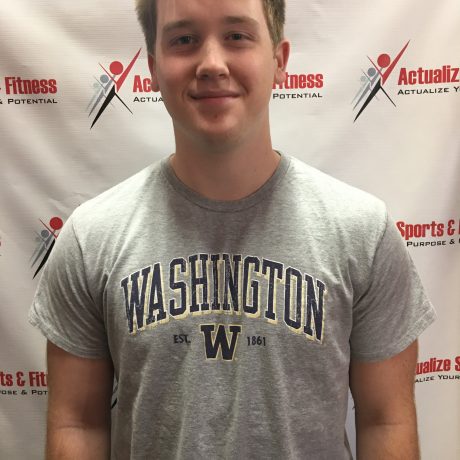 We are proud to recognize Derek Graham as the Actualize Sports Athlete of the Month!

Fairly new to training when he started with Actualize in December 2016, Derek was motivated about upgrading his strength, conditioning and performance, but he was also dealing with some nagging pain associated with improper training technique he picked up before working with Actualize. Fast forward to today and Derek has made huge strides in confidence, he is no longer struggling with hampering injuries, and he is an entirely different athlete physically.

As I think about where Derek started and where he has come, he personifies what we believe it takes to actualize one’s purposes and potential:

“Everybody wants to actualize his or her purpose and potential. But most do not understand nor are rarely given the tools to achieve safe, effective and sustainable success over time.

The process of actualizing purpose and potential begins when desire meets an intentionality to move forward, and the discipline of undergoing the rigors required is valued and pursued with the tools to make it happen.

You bring the desire, intentionality and discipline, and we arm you with the plan and tools which educate, encourage and empower you every step of the way.” – Coach Blaine

Derek, I saw your desire the first time we met to discern whether Actualize was a good fit. Many people can vocalize their desires, visions and dreams. Unfortunately, not as many people take action to actualize their purposes and potential. Your results are a direct reflection of desire, intentionality and action colliding with the plan and tools to make it happen.Well done showing up everyday, pursuing excellence as a man of character, making sacrifices to undergo the rigors that would take you from you were to where you wanted to go.

Derek, I’m excited to see how the same strengths, values and work ethic you display at Actualize will manifest in the different categories of your life in the future. Derek’s mom, Starla, shared:

“Dave and I have always given Derek the latitude to make his own decisions and live the rewards or the disappointments based on those decisions.  We’ve tried to teach him to give much if you want to get much. I couldn’t be happier at the young man he has become. He is kind, confident, funny and thus far has made great decisions for himself during these tedious teen years. Derek is young for his grade and won’t turn 18 until after he graduates. For a 16-year-old, he is mature and self-confidant, I believe in part from what he has learned at Actualize.  As far as the future, he has started flying lessons as he wants to ultimately be a helicopter pilot. His plan is to have his fixed wing license before he graduates next year, then onto some level of college then to helicopter school. I look forward to seeing him continue his growth.”

I’m very proud of you Derek. It’s an honor to coach and call you friend!

Are you a competitive athlete, team or coaching desiring to take your game to the next level? Click here to learn about the 2018 Actualize Sports Summer Training Program!