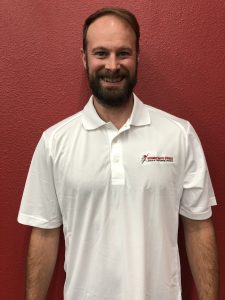 Dave was born in Kalispell, MT and raised in East Wenatchee, WA.  He played multiple sports in his youth but soccer and basketball were his passion. He was a three-year letterman for soccer and two years for basketball.  Competing as a high school athlete unfortunately ended when he broke his leg his senior year in the regional finals for soccer.

“I became a weekend warrior as an adult, playing in adult soccer and basketball leagues, running races, marathons, triathlons, duathlons, and century cycle rides. As my body started to break down I become more intentional about training. I reached out to Blaine to help strengthen areas of weakness but more came from just the physical pain I endured. He helped me realize the mental strength I had to overcome pain and ultimately become mentally and physically stronger. Speaking with Blaine about his own passion helped me fully realize that sports and fitness was a passion of my own.  I hope to share my individualized knowledge of sports and fitness to others.

I studied to become a personal trainer because I want to help people achieve their goals, whether it be to lose weight or to continue in activities that they love. I also want to help bring to this community something that I wish I had when I was in High school; to help young athletes potentially play at a higher level. My passion lies with soccer and I want help educate those young soccer players with an extra tool set that I didn’t have. Soccer is a growing sport in this community but it is underserved with getting them to that next level.  We have some very talented student athletes in the North Central WA community and it would be a joy to help in their journey in life to reach their ultimate goals.”

Dave has have a BS in Business management and ATS In Radiologic Sciences. In addition to his time at Actualize, he sells medical devices that help map the heart for arrhythmias. He is working on his strength and conditioning certificate from NSCA.