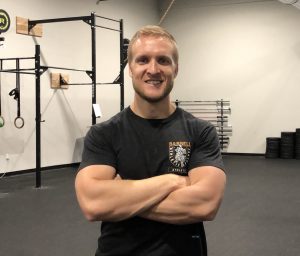 Greg grew up in Renton, WA where he played club and high school soccer. Upon graduation his activity level dwindled where sporadic intramurals were the extent of his exercise. Greg knew he had to do something to stay in shape wherein he found and fell in love with the weight room. Shortly thereafter he was introduced to CrossFit by a friend which sprung on a whole new passion. From that point Greg was determined to learn everything he could about optimizing health through fitness, nutrition, supplementation, recovery, and stress management.

While Greg completed his undergrad degree, where he graduated with a B.S. in Aerospace Engineering from Wichita State University, he was asked to coach at the local gym and perform personal training. He immediately fell in love with the job and the idea of being able to transform people’s lives one healthy habit at a time.

Greg has spent the past 8 years perfecting his craft of coaching and experimenting with all forms of fitness himself. A back surgery, L5-S1 fusion performed in 2018, caused a change of perspective of what health meant to him. Instead of the gym being his life, chasing new one rep maxes, the gym became supplemental to his life. Greg now trains in a manner to look good, be strong and mobile, and capable of performing any activity thrown his way with ease. This allows him to pursue his passion for the outdoors which includes skiing, backpacking, hiking, mountain biking, and paddle boarding (to name a few).

Greg’s holistic approach to health means he not only addresses fitness but nutrition and lifestyle management. His in-depth movement assessment and deep dive into the client’s life allows him to tailor the program specifically to the individual to achieve optimal results. Greg hopes his passion and enthusiasm for health and fitness will rub off on everyone who crosses paths with him.