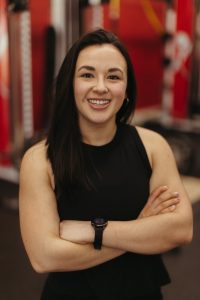 Coach Mika Hernandez was born and raised in Ferndale, WA. Mika was not exposed to athletics or fitness in her youth. Her parents had her take art classes and piano lessons over sports. At the beginning of her 8th grade year, Mika’s best friend asked her to join the Middle School Cross Country Team. She had no idea what Cross Country was but decided to give it a shot. After the first day of practice, Mika was hooked and went on to run Cross Country and Track all through high school. Little did she know this was the beginning of a lifelong journey in health and fitness.

Mika attended Ferndale High School where she excelled in sports and academics. Mika lettered all four years of Cross Country and was Team Captain her Junior and Senior year. Mika shares, “Believe it or not, I was a timid, quiet girl just shy of 5 feet tall. I was shocked my Junior year when my coach shared he was making me co-captain of the Cross Country team. I wasn’t loud and not confident speaking in front of others. I felt there was no way I could help lead 25 other teammates. My coach told me that being a leader was much more than being loud. He shared that traits like leading by example, being compassionate, and making sure no one on the team was forgotten were examples of leadership.”

Freshman year Mika took a running and weight training class where she was first introduced to weightlifting. Mika shared, “I have a vivid memory of my PE teachers encouraging the students to lift weights and push themselves in the weight room. Looking back on an era where lifting weights was thought to be dangerous, I am grateful now to have been encouraged to do so.” Mika  was the first girl in her school to Bench Press her bodyweight (115 lbs at 15 years old). Along with success in sports during high school, Mika graduated as Salutatorian of her class in 2014.

After graduating high school, Mika attended Western Washington University. She graduated in 2018 with a Bachelors in Kinesiology (Movement Studies) and a Minor in Psychology.

While attending college, Mika was asked to coach Cross Country at Ferndale High School where she had competed as an athlete the year before. Mika was Assistant Coach for 4 years and Head Coach for 1 year before moving to Wenatchee in 2020. While coaching Mika was able to implement a strength and conditioning program for the team.

“My favorite part of coaching youth athletes was watching kids push past their mental barriers and seeing the athletes’ potential bloom. Coaching is much more than just winning races. It’s also about empowering athletes with the tools to succeed in every aspect of life, and showing kids how much they matter and are loved.”

Along with Coaching Cross country, Mika gained a lot of experience coaching at several different facilities including shadowing under Damien Fischer, the Head Strength & Conditioning Coach at Western Washington University. In the Winter of 2020, Mika became certified by the National Strength and Conditioning Association CSCS (Certified Strength & Conditioning Specialist) and has enjoyed practicing all of the tools she has learned.

“While in high school and college, I struggled immensely with body image and overall confidence. Much of my family were not athletic and could not provide me with the tools I needed to have a healthy relationship with food and exercise. I looked to social media and the internet for help but these only led me deeper into diet culture, often cutting calories drastically, working out multiple times a day while trying to participate in sports, which ultimately left me feeling exhausted mentally and physically. Finally when I was 21, a few coaches took me under their wing and got me into Olympic Weightlifting and Powerlifting. In school, I learned the importance of nutrition to meet my daily needs and how to fuel my body for performance.”

As Mika started to practice Olympic Weightlifting and Powerlifting, she developed a strength and confidence in herself that she lacked. As a coach, Mika finds joy in helping others find their strength. She wants to encourage and equip others to reach their health and fitness goals in a healthy and sustainable manner so they don’t have to go through the same pain she experienced. She desires to provide others with the tools to become the strongest versions of themselves in a safe and redemptive spirit. Mika shared, “I don’t want anyone to have to go through the challenges I faced as a young girl getting sucked into diet culture because I was never taught how to balance fitness and nutrition.”

While attending Western Washington University,  Mika joined some of her classmates in a Weightlifting, Powerlifting and Crossfit meet that was held for the students and staff. She placed on the podium in each event and this ignited a passion for Weightlifting and Powerlifting. After COVID,  Mika decided to focus on Olympic Weightlifting and has since competed in two USA Weightlifting Sanctioned Meets. Mika loves pushing herself in the weightroom and is determined to be the best and strongest version of herself.

Mika shared, “Fast forward a few years, after many different jobs, I finally found a home at Actualize Sport & Fitness. I am able to do what I love full time. In addition to coaching the youth athletes and adult fitness enthusiasts at Actualize, my dream is to educate individuals in the Wenatchee Valley about Olympic Weightlifting and provide them with a fun and safe place where they can lift and are given the tools needed to succeed.”