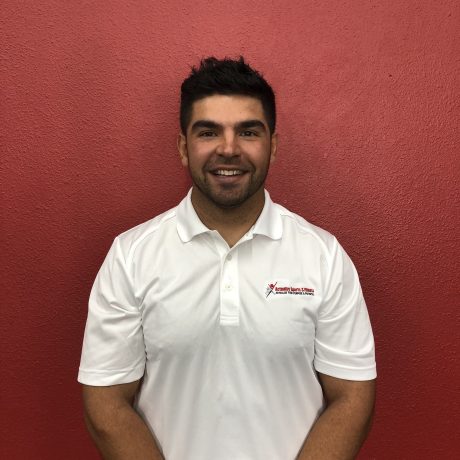 Coach David Garza was born and raised in Othello, WA. He attended Othello High School (2005-2009) and triple sport athlete: Football, Baseball, and Basketball. He was awarded All-State, All-Area, and All-Conference honors for Baseball and Football multiple years. David graduated as a top-10 senior in 2009 with a 3.9 GPA and received the Presidential Scholarship Award, which was a full academic award for 4 years of full tuition at Eastern Washington University.

At Eastern, David majored in Health & Fitness with an emphasis in Education, Coaching, and Health Sciences. He was accumulated as a club baseball player for 3 years (2009-2011) where he earned player of the week honors.

David shares some of his story:

“I wanted a wide spread of opportunities that I could gain in the Health & Fitness realm after graduating. I worked as an intramural and fitness facility assistant at Eastern, gaining experience in recreation and personal training. I graduated with honors in 2013 and pursued my student teaching back home at Othello High School. Shortly after long-term subbing for Othello School District, I became a Recreation Manager for Wapato Point in Manson, WA in 2014.

My life transitioned to living in Wenatchee, after getting married in 2014, where I became a teacher and coach. I started my full-time physical education teaching career in the Wenatchee School District and also spent time teaching in the Eastmont School District. I coached at Wenatchee High School as an assistant coach for the Varsity Baseball program and an assistant coach for the Football program, and spent some time as the Head Coach for the Apple Valley American Legion Summer Program (15U – 19U).

In 2018, my life and family goals changed from teaching to working at Eastmont Parks and Recreation as a Recreation Marketing Aide. Then, an opportunity arose with starting a small business of my own called, Athletic Break-Through, and at Actualize Sports & Fitness as a Performance Enhancement Coach.

I knew Blaine Davidson (Owner of Actualize Sports & Fitness) from coaching with the Wenatchee High School Football program where he was leading their strength & conditioning program at the time. When the opportunity of working at Actualize Sports & Fitness arose, I was all-in to learning what the process was to become a better coach and becoming apart of Actualize business, staff and community. In my short time at Actualize, I am learning my goals are held accountable and a relationship between clients and coaches really does matter in order to get my goals met, all while building a solid foundation to improve my health and fitness lifestyle.

My passion is to help others grow in all facets of life, not only in the health and fitness realm, but in all works of life as well. I have worked with many athletes and individuals in growing understanding of how to better their lives and build their motivation to climb their goals in life.”

My Favorites: My family (Kaitlyn (wife), two sons Xander & Paxton), playing/coaching/watching and being apart of sports, attending Church to grow into being a man with honor in God, visiting relatives, recreation, relaxing at home, exercising, and of course eating!