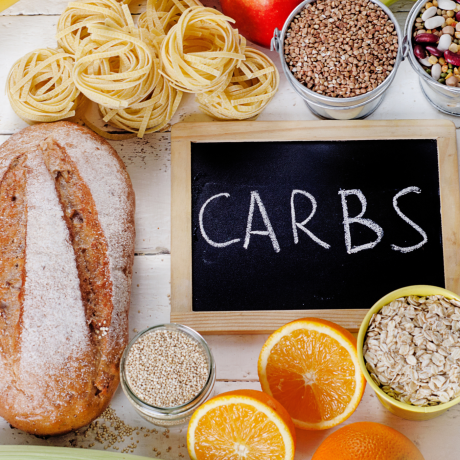 You’ve probably heard this before, but is it true? Let’s dive in!

The idea behind the statement above goes something like this. “If I eat carbs at night it will cause weight/fat gain or deter my weight/fat loss progress. Eating  too close to my bedtime disallows me to use the energy (carbs) I consume thereby causing the carbs to turn to fat.”

This myth concludes that nighttime eating–specifically carbohydrates–negatively impacts health and body composition. From a general logic point of view, you can see how somebody desiring to lose weight/fat might be tempted to rationale this logic. But rarely is weight loss so simple. Let’s take a closer look at these complexities.

The time of day has less effect on weight loss than the overall foundation of calories in and calories out. Progress can still be made if you eat your dinner at 6pm or 8pm, as long as you are staying within parameters of your energy expenditure and total daily calories consumed.

There is usually more to late night eating and snacking than just hunger. In fact, hunger may have little to nothing to do with it. Late night eating goes hand-and-hand with unsatisfied cravings, boredom, and stress/emotional eating. The foundation of this myth may have more to do with the type of eating done later in the evening rather than the actual timing of the food consumed. Control exits the building around 8pm for many. So, when choosing to “not eat carbs after dark,” many will see progress from reducing total caloric consumption rather than from the nutrient timing itself. If you are choosing to use this as a tool for weight loss, we applaud your diligence! Tools such as eating windows, intermittent fasting, or not eating after 8pm, are excellent when in place to control calorie intake. But if a planned “pre-bed” snack fits within your caloric goals of the day, eating it at 7:59 and 8:01 won’t make a magical difference and weight loss can still be made.

In the 1990 to early 2000’s, there was a lot of attention around this topic. One study examined postprandial metabolic responses to identical meals throughout the day and was performed on healthy male subjects who were classified within a normal weight. They found that the thermic response to meals appears to be at its lowest with nighttime intake (Romon, 1993). Other studies showed that meal satiety varies from time of day and that food intake during the night is less satiating and leads to a greater daily caloric intake compared to food consumed in the morning hours. (Castro, 2007)

The desire to eat late into the evening may have to do with high restriction during the daytime. “The Bath Breakfast Project” by James Betts and colleagues at the University of Bath examined the impact of eating a large breakfast on energy balance. The findings showed that eating a larger meal earlier in the day leads to a much greater energy expenditure over the day compared to waiting until 12pm to have the first meal of the day. (Betts, 2014) Evidence suggests feeling satiated throughout the day could eliminate the need for increased caloric consumption after dark. Could this “no carbs after dark rule” actually be a tool for behavior change?

A little deeper. One study showed that when a protein or carb source was consumed 30 minutes before bed in sedentary overweight and obese women their appetite measures improved. (Kinsey, 2014) Appetite is a major key to weight loss. A recent study published in the Journal of Obesity examined details about the metabolism and its mechanisms. People were placed on a calorically restricted diet for 6 months and split into two groups. One controlled group that ate carbs throughout the day and an experimental group ate 80% of their carbs at night. After 6 months of eating the same number of total calories, the experimental group that ate the majority of their carbs at night lost significantly more weight and body fat! They also were better satiated and felt less hungry. (Sofer, 2011) Shocking, I know!

Weight loss is not one size fits all. Maybe you like to resistance train late in the evening and you eat most of your carbs around your workout window. Maybe you are an athlete who needs more calories that cannot fit in a daytime eating window. Maybe your lifestyle doesn’t allow you to not eat at night because you work nights. Or maybe you just hate eating breakfast! There are caveats to every nutritional “rule.” Take a journey to figure out what works for YOU.

Eating carbs after dark isn’t going break your progress if staying within your caloric total for the day. Focus on the number of calories you consume per day, consistently exercise, develop a healthy sleep cycle and stress management habits, and consume daily water. Nutrient timing is not dead, but it is also not the hill to die on.

Don’t get lost in the finer details when attention should be placed on foundational principles. Connect with a Actualize coach to develop the nutrition plan to actualize your goals.

Are you a competitive athlete who wants to increase performance while decreasing the likelihood of injury? Click here to learn more about Actualize Sports and schedule a parent-athlete meeting!

Are you an adult fitness enthusiast who is interested in transforming your health, fitness and nutrition? Click below to learn more about Actualize Fitness’s most popular new client offerings!