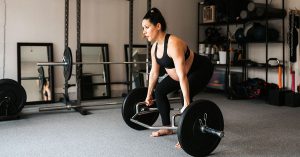 “Exercise is dangerous for pregnant women.”

Disclaimer: always check in with a provider for specific guidelines and potential restrictions before following any generalized advice and promotion of lifting during pregnancy.

Safety and health to both mother and baby are the most important when deciding whether or not to exercise during pregnancy. Outdated advice has been based off the 1985 recommendations by the College of Obstetrics and Gynecologists (ACOG). These claims lacked scientific support and now have been found to be overly conservative. Newer guidelines from the ACOG now state that, in the absence of medical complications, 30 minutes or MORE of moderate exercise in most if not all days of the week is both safe and RECOMMENDED for pregnant women. (McMurray, 1993) Of course, obtain and follow a physician’s consent and advice before participating in an exercise program. But let’s get to the de-bunking!

One fear in exercise related concerns for pregnant women is a devastating one, miscarriage. But it has been found that spontaneous miscarriages are not associated to activity level in most accounts. And to ease the worry, a study conducted in 1999 found that women who exercised during pregnancy had a lower risk of a spontaneous abortion than those who did not (M. Latka, 1999). Exercise-induced hyperthermia is another common fear due to the fact it can have detrimental effects on the fetus. Research was conducted in animals that showed heated stress in the early stages of pregnancy to lead to an increase of neural tube defects. Studies done in humans do not support the same conclusion. In fact, one study found that exercise up to 70% of maximal heart rate shows no significant increase in the core temperature from pre-exercise levels. To add further value, the plasma volume in a pregnant woman expands and increases temperature and blood flow which then accelerates the dissipation of heat (Larson & Lindqvist, 2005). So, the pregnant body knows what to do! Let’s challenge this idea of fragility in women, especially women who are pregnant. The human body is amazing!

More recent research has shown an overwhelmingly positive response when it comes to exercising before, during, and after pregnancy. I encourage women of all circumstances to press into the benefits that movement and exercise can do during the pregnancy journey. A study conducted in 2003 showed that women who engaged in any regular physical activity during early pregnancy, compared with inactive women, experienced a 35% reduced risk of preeclampsia (Sorenson, 2003) This is incredible news! Preeclampsia affects 2-7% of pregnancies and is the leading cause of maternal and fetal morbidity and mortality (Weissgerber, 2004).

A low-to-moderate intensity strength training program can reduce back pain during pregnancy! One study took 32 pregnant women with a history of back pain through a strength training regime twice a week for 12 weeks. During this time their external load increased dramatically! 36% for leg press, 39% for leg curl, 39% for lat pull down, 41% for lumbar extension and 56% for leg extension! Training was associated with a 14% increase in lumbar endurance and blood pressure was unchanged following acute exercise sessions and after 12 weeks of exercise training (O’Connor, 2014). Any exercise that promotes back health while minimizing stress to the spine is a win for pregnant women everywhere!

Here are some quick tips for those eager to keep strength training during pregnancy:

Like most hot topics, there needs to be more research! We can say as much for the women’s health department as a whole. But these recent articles published and the green light from many doctors seem to be advocating for overall health for mother and child, which includes an exercise routine.

Are you a competitive athlete who wants to increase performance while decreasing the likelihood of injury? Click here to learn more about Actualize Sports and schedule a parent-athlete meeting!

Are you an adult fitness enthusiast who is interested in transforming your health, fitness and nutrition? Click below to learn more about Actualize Fitness’s most popular new client offerings!